It’s spring, and after a long and snowy winter, in which the hens spent more time in the coop than outdoors.  The weather is warming up, the grass is growing.  Flowers, weeds and bugs are everywhere.  Life is good if you’re a chicken.

A couple of weeks ago, several of my hens started exhibiting signs of being broody.   Hanging out in the nests longer, or later in the day.  Puffed up feathers and growling or yelling while they are in the nest.  Growling and yelling at other hens when they are off the nest.

This kind of thing happens every spring.  Hens thinking that maybe they want to go brood on some eggs and raise some babies.  Its a natural, hormonal instinct for chickens, albeit one that the hatcheries have tried to breed out of their birds because egg/meat production is more profitable than hens sitting on eggs.   But if you’re a back yard chicken owner, homesteader, or farmer who wants a self-sustaining flock, a broody hen might be what you’re looking for.

My first year as a chicken owner, I’ll be honest, I didn’t really know if I wanted broody hens.  Most the websites and blogs who talk about broodies talk about how to broody break them, because most people want eggs.   And I had Abby, who went broody less than two months after laying her first egg.   I broke her the first time, but decided when she did it again a month later, that it wasn’t worth trying to break her again, and just gave her eggs.

Watching Abby raise her chick – the rooster now known on this blog as Pip – was all it took.  I was bitten hard by the bug, and now wait with anticipation for the sign of broodies I can give eggs to.  There is something of wonder about watching a mother hen raise her Littles, seeing them explore the world at her side.  Learn and grow, and become a part of the flock.

I also like seeing the way genetics plays out in the 2nd Gen chicks.  I have a small group of ‘barnyard mix’ hens and two mix roosters who are all very unique in their looks and personalities.

So… anyway… I had five hens who started to act like they might go broody.  Penelope, Claire, Julia, Rapunzel and Pavelle.

Penelope an Julia really didn’t do anything.  They did that last year, too.  Walked around bucky for a week or so and then just stopped.   I don’t expect this year to be different.

Claire is STILL puffing up while she’s on a nest and sometimes while she is off it.  Given that she actually DID go broody last spring, I’m watching her closely.  She might.  And she was a good momma, so I would have no qualms about giving her eggs.

Rapunzel went HARD. Rapunzel is a Buff Orpington and Orpingtons are known to be goody broodies.  Rapunzel spent the least time ‘going through the motions’ and after a couple of “well, maybe” days, she hopped in a nest and committed to sitting on ceramic eggs.   She is very dedicated to them, and I’m going to let her stick with the ceramic eggs because I have special plan for her.  Little Dude is going to be doing an Embryology project for 4-H, which means we will be hatching eggs in an incubator and documenting every step of the way.   I have eggs coming from My Pet Chicken, because Little Dude wanted Barred Rocks.  So we have 4 Barred Rock eggs and 6 “assorted” eggs, which could be any breeds, coming later this week.  I’ve decided that I will be giving Rapunzel the chicks that hatch from those eggs.  Hopefully, she will accept them as her own.  Otherwise, I will have to put them in the brooder and raise them separate of the rest of the flock.

In the meantime, Pavelle is sitting on six eggs.  Three are hers, and three came from Padme, the little Easter Egger hen.  They are the smallest eggs I have, even though Pavelle is very impressive when she is puffed up and screaming at you, she is still a small hen.  Any of the babies she raised will be bigger than her at 6 weeks of age.

If anyone else goes broody in the between time – I’m looking at you, Claire – I will probably share the wealth, rather than give more eggs.  Claire, for example, could take on some of the 4-H babies, so Rapunzel, who is a new mother, doesn’t have to raise a potential ten babies on her own.  But that is a big IF that has a lot of variables.  IF Claire or anyone else goes broody in the next 3-4 weeks.  IF the incubation is successful and all the eggs hatch.  I’ve never used an incubator before and I’m borrowing one from DH’s aunt for the project.  So many variables.

In the last picture, you can see that Pavelle and ‘Punzel are in a prime location. Pavelle will steal eggs from the nests around her, and I constantly have to check underneath her for extras. Which is funny because one time, she had three extras and they were sticking out because she is so small they don’t all fit!

I took some videos of the chickens this weekend. 🙂

Here is Pip, getting a treat from Little Dude at feeding time:

And here is Penelope, doing her best impression of a woodpecker:

And here’s a bonus… our Pip-aversary pics!!!

Yesterday DH, the kids and I finished up the last of our Christmas shopping.  After wrapping and packaging up gift baskets for teachers and the bus driver, we headed down to the barn to collect the last of the eggs for the day, count heads and lock up the chickens for the night.

I was apprehensive because while we were busy, this was happening in the barn yard:

As you can see, the snow from Saturday didn’t last long. We still had a small powdering yesterday morning but by afternoon it was mostly a memory.  Abby decided to show Pip the secret treasures a weed patch can hold.  Personally, I think that he’d be better off looking in the spring, when there are actually bugs to find.  But what do I know?

So, I was apprehensive, because while I was snapping this picture, Little Dude spotted a bigger, darker figure flying overhead, looking for God only knows what, and Pip is just small enough to snatch if the big flying shadow hungry enough.

It must not have been, because Pip was in the coop with his Momma, Papa and Aunties when we went down to lock them up.

DH came with us, and we gave the chickens an early Christmas present… a new roost for their coop.

A little back-story here, but before Thanksgiving, Dad and I clipped their wings so that we could lock them in the run on the days we go away and can’t watch them.  I think I’ve mentioned in other posts that, some days the barn yard and pasture aren’t enough for them and these chickens cross the road to come looking for… I’m not sure what.  Me?  Little Dude??  Bugs???  Greener grass????

And while it’s less of a problem on days when someone is here to see them safely back across the road, on holidays where we might be gone it’s a huge problem.  (The fence is in the planning stages now.  Yay!)

But a more interesting problem, however, has risen inside the coop as a result of the wing-clip.

My girls can no longer roost in the rafters.  They’ve been trying, because they like it up there. and I guess (I’ve read anyway) that the ones who roost highest up have some kind of social status in the flock.  But mostly, there’s about five or six hens who really liked roosting up in the rafters.

Since Thanksgiving, they’ve all been trying to reach that Nirvana … to sad/pathetic/sometimes hilarious results.   Little Dude and I have watched several go crashing into the side of the coop time and again.  There’s also been some domestic squabbles about who’s sitting in which spot on top of the laying beds (there’s a shelf on top where they sleep sometimes).  All this because some of the girls can’t jump up to the rafters.

So after a few nights of this, I asked DH to build them a perch they could use, halfway between the beds and the rafters.  I figure if they had a shorter distance to go up, some of them could make it into the rafters and some might stay on the roost.

Dots freaking out about whatever Dh is doing.

8-foot beam on this side…

sitting on posts. Dots and Madison testing it out.

Madison found a comfy spot to sit on the new roost. She likes it.

8-foot on the other side, too. 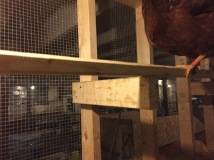 A better picture of the beam/board it’s sitting on. 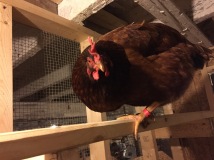 Maicey is testing this side. She spent a lot of time looking up and down and trying to decide if she could now jump across to the rafters above the windows.

I placed Dots, Madison and Maicey on the perch myself, but while I snapped pictures and helped with clean up, Penelope, Henrietta and a couple of the others made it up there themselves.  By the time we left, Henrietta had found her way back into the rafters and the Promised Land.  Even Dots had snuggled into a squat on the perch and closed his eyes.  He usually sits in the corner on the top shelf of the beds.

Over all, I’d say it was a successful project.