Waaaay back in August, I showed you all pictures of an antique egg basket, which had been left on the farm by the previous owners.  There was no way of knowing how old it was, and by the time I located it in the barn, it was rusted and broken.

I spent a several days sanding it down by hand, but it sat unused for a while because other things got in the way.

Last week, DH soldered the broken bits and I finally got to paint it.

Honestly, I kind of thought I wasn’t going to see everyone lay until next spring, given my ladies’ habit of waiting 1 – 2 weeks after someone lays before a new one starts.  That and little Claire being such a b-word while she’s in a laying box.  She sits there half the morning and screeches at anyone (me, Little Dude or the other hens) who come inside the coop.  And she bites.

I think it intimidates the other hens, because in the last couple of weeks I’ve seen some of the girls silently checking out the laying boxes, only to be scared off by the racket she makes.

But in the last couple of days, they all seem to be getting in on the act.  I’ve had as many as five hens in the boxes at the same time, all laying.

This afternoon has seen the most activity, with a lot of newbies getting in on the action.  This almost meant the coop was filled with screeching and cackling.  Dh said it sounded like someone was killing them at one point.

The result is thirteen new eggs. That’s thirteen out of sixteen hens. Yesterday was only ten.

I don’t really know if everyone is laying or not (just some of them not every day) or if I’m still waiting on a few stragglers.

In related news, I had my first egg sales. My sister in law bought five dozen eggs on Wednesday. I should have kept on dozen, because we needed it and we didn’t realize, but that was a couple days ago and I was still only getting 7 – 8 eggs a day.

As July progressed, in between the slow culling of the roosters, I’ve been anxiously awaiting the coming of age for my sexlink hens, and the coming of eggs.  About a week ago, Abigail, who has always been the biggest of the sexlinks, started doing a ‘submissive squat’ whenever someone tried to pick her up.  So we’ve been watching her closely.

In preparation, Little Dude, DH and I did some changes to the coop, namely curtains for the beds I’d to have has laying boxes.  I’ve read in numerous places where the curtains offer privacy and shade for the hens, and a safe place to lay their eggs.   Once the curtains were up, Little Dude and I placed extra straw and plastic Easter eggs inside the beds.  The straw to encourage nesting and the plastic eggs because we have a ton of those and I didn’t want to go to the store to buy golf balls.  I figure that the hens won’t care about the color, right? 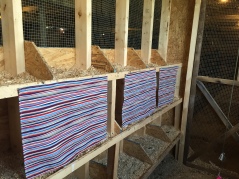 One of the sexlink hens checking out the laying box.

Close up of the hen in the laying box. 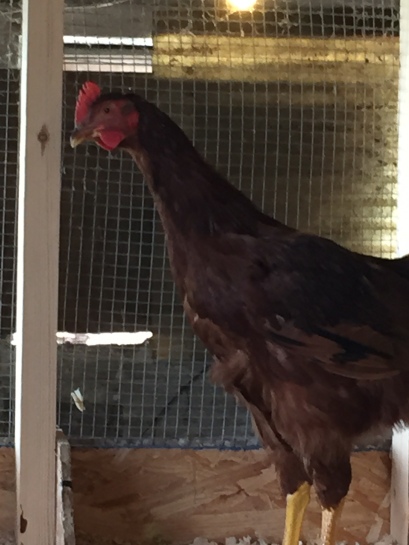 A ‘little Roo’ freaking out because of the curtains. Chickens really don’t do change well, do they?

I saved extra cloth from the curtains to go with the other egg-related project I’ve been working on in my spare time… the restoration/renovation of an antique egg-basket.

I was hoping to finish this little project before the hens began laying, but Abigail had other plans, apparently.  🙂

She was in the coop this morning behaving very strangely (for her, or for what I’ve seen of these birds thus far).  She was in the laying box she has been favoring all week, and I mostly ignored her while I was cleaning the rest of the beds.  Then, she stood up, stuck her head out behind the curtain, stretched her neck waaaaaay out and started screeching like nothing I’ve heard before.  She did that for several minutes, which totally freaked Little Dude out, and he began to worry. But I told him that I’d heard ‘some chickens sing before they lay an egg.’  So maybe she was getting ready to lay one.  Not that I would call that sound ‘singing.’  It was more like panic.  Like she was yelling at Dots to hurry up and get the boiling water and bed sheets, the baby was coming whether the doctor was here or not.

And then… she just stopped panicking, stood up and started dragging straw from some of the other laying boxes.

That’s where I left her, dong her nesting thing.  No egg.

But I came back down to the barn this afternoon and found this in the coop, in that same laying box:

Close up. I love the speckles 🙂

And here is a comparison of the real egg with the plastic egg. The Plastic egg is the standard size, too. Abby’s egg is about the same length, but not as big around. Bigger than I thought it would be, though.

And here is the ‘proud mama’ and Dots with her.

For the record, Abigail, Dots and their sexlink ‘sisters’ are 17 weeks old today. I wonder when Rebekah and Ava will start laying, too? 🙂