Or… the New Coop Order…

Yes, the fight for dominance is over. My little ‘Leapy Man’ aka Philip has won the bid for Main Rooster. (Don’t ask why I call him Leapy, I just do. Actually, it’s Philip, but sometimes we called him Filipe and from Filipe, we evolved into Leapy.) 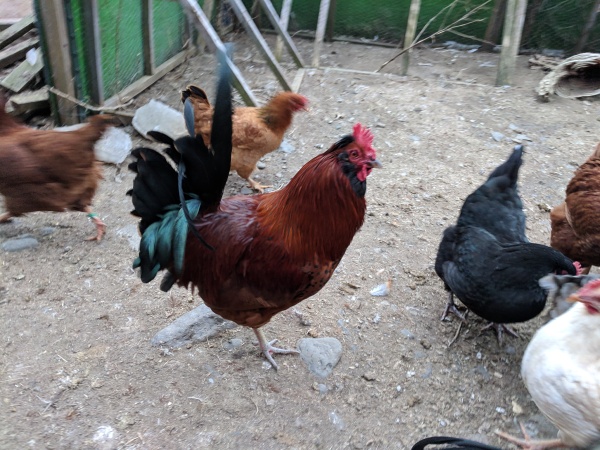 Philip, aka Leapy, a two-year-old Barnyard Mix with a unique heritage and a strong personality.

Philip is the bio-son of Pavelle and his egg was fertilized by Pip, who is, of course, Dots’ and Abby’s boy.

The new Second in Command, or 2IC, is Sylvester, the Buff Brahma that my Tweety Girl raised last year. He is a year-and-a-half old and although he is BIG, he is gentle.

They have been Dots’ 2nd and 3rd for a while now, so it makes sense that with him deposed, they would each move up a rank. The position of 3rd is not yet filled. It won’t really matter because once winter is over, and we cull the Summer Boys, most likely they will all go.

Would you like to meet them? My Summer Boys?

Of them, the only one I really like is LRJ. He is sweet and nice and quite handsome to look at.

Manly is shy and hard to pick up, not unlike Pip was at that age. And for being part EE, he is not a spaz like Luke and Padme were. He’s just… Skittish.

Rory is like Luke incarnate. Big, rough with the ladies, but he’s also incredibly skittish. More than Manly. He’s just a wild brute.

Branson is full of ‘small dog syndrome’ or … Little Rooster Syndrome. He’s small enough that I can hold him in one hand, but he acts like he is bigger than Sylvester. He’s the youngest and wants to mate all the girls. They don’t like him. Even his mother, Pavelle, does not like him now that he’s hit puberty.

This ^^^ would be why my coop has so much chaos. Because of these Summer Boys. I suspect LRJ might make a good 3rd of I decide to keep him. It’s a tough call.

He’s doing well.   His eye has healed and it seems as though the new head roosters have decided that he isn’t a threat to their positions.   He hangs out mostly in the coop, for now, which is probably good for him because he doesn’t like the winter cold anyway.

He doesn’t crow in the mornings anymore.  He used to lead the chorus of ‘good morning! good morning!’ and now, I never hear his crow in the morning.  My Girl did say that he was in the coop crowing for the ladies with him this afternoon when she went down,  I’m encouraged to know that he is. at least, no longer afraid of the hens.   He’s also not afraid of the younger Summer Boys.

Now, if you’d like, I’ll show up pics of some of the other new, summer additions to the flock. I didn’t update all summer and we have quite a few new faces.

Here’s a few more from around the barnyard…