Since I gave Mini-Pav his/her own past, I thought it only fair to do that same with his siblings. I give you… Feather Butt. 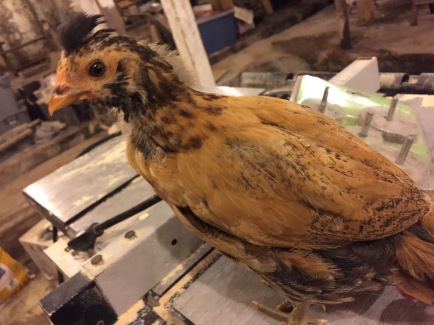 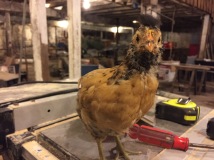 Feather Butt, another of Pavelle’s part Pavlovskaya, part sexlink, part Rhode Island Red, possible part Polish, mixed up chicks… is the biggest of the three chicks, with a bigger mohawk than Mini-Pav, but almost non-existence wattles.

Feather Butt has grayish yellow legs with a yellow beak and comb that kind of reminds me of Pip.  His/her legs still have little wisps of feathers, showing his Pavlovskaya heritage.  But only little tufts.  You have to be to up close to see them at the ankles and tops of his/her legs.

In short, since I like this chick, Feather Butt is a possible rooster.   Anyone want to place bets?