Well, I promised an actual flock update, because I haven’t given one in a while.

There’s not much to say about the old ones.  They hate the nasty Cold White and some of them are still in various stages of molt.

Is this normal molting?  I envisioned them losing their feathers in October/November…not January! And yet, aside from Amy, I know I have at least four more hens who are in the midst of a slow molt.  Does it always take this long?  I’m so glad we haven’t have negative temperatures, because they would freeze!  Especially Amy!  I mean, look at her!

I’ve been feeding them Feather Fixer  mixed in with their regular food, because I heard it helps them molt quicker/get over it faster.  Whatever.  I don’t think its working. Or else it is working and they would be molting until June without it???  Again, is this normal for it so long???

Seriously,because I feel so bad for the poor cranky things!

Now…since it is cold and windy today, and the flock all opted to stay inside and bug me while I attempted to clean their beds and fill the feeding tubes, I did manage to get pictures of Ashley’s Babies.  They are eleven weeks old. as of yesterday.

The tricky part is that all the white ones – Max and the Dalmies – kind of remind me of Eugenie at that age.  She was big,had a slightly pink face, which stood because she is white, and I wasn’t sure at first if she was a henny or a slow-developing roo.  Keep that in mind as you look at the white chicks.  Feel free to click the pics to make them bigger.

Max looked like a boy when he/she was little,but now I see inklings of a little hen. 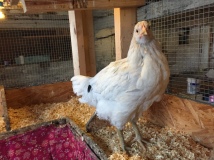 I think this is the same one I named Dalmie #1 in previous pics. Not sure.

A gentle reminder that as per Twiglet’s comments on prior posts, we think Pip is the father of the Dalmies. 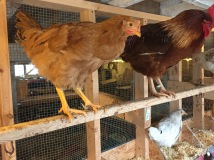 So… I’m betting anything that Felicia is really Felix.  If this chick starts laying eggs in the spring, I will be so surprised.

Well, that’s the scoop on Ashley’s Babies.   If you’re up for a game of “Henny or Roo?”  Feel free to take your best guesses in the comments.

ETA:  If anyone is interested in comparing these chicks to Dani and Eugenie at roughly the same age…

And now… here’s a special treat… Abby’s baby Easter Eggers.  The will be 8 weeks on Thursday.

These chicks don’t have names.  I’m trying not to name them until I know what they are.  That, and Little Dude wants to name them after Sith Lords.  And I don’t want an Easter Egger named Darth Maul.  *sigh*

The darker chick is smaller, really skittish and mouthy. Based on behavior alone, I think she’s a hen.  She is curious about me, but afraid to come close.  She likes treats and will eat out of my hand and then yell at me for more when I walk away.

The yellow/buff-ish one is bigger and less skittish, but standoffish.  Like a little rooster-in-training.  He also likes treats but doesn’t demand them, like his sibling.

Now… these chicks are staying.  When the other 2 vanished without a trace, I told DH that under no circumstances were we sending either of these to Freezer Camp if they were roosters.   Why?  Because he told me I could keep Esther if I really, really wanted, but I flip flopped, and then he said “well, you do have Abby’s 6 eggs.”  So I aired on the side of Abby having potentially 6 new EE chicks.

This is why you don’t count your chicks before they hatch, people.  Pavel hasn’t forgiven me for sending her favorite brother to Freezer Camp… and Abby only has two chicks.

So…unless the little yellow/buff one has major dominance issues with Dots and Pip, these chicks are here to stay.  No matter what.

I’ll end this post by pointing out anew section of the blog I’ve just started working on.  Meet The Chickens, a series of bio pages for my flock so that when I say  Dots, Abby, Jolene, Wilda… you know who I mean.  I’ve been meaning to do this for a while, but for various reasons, I just haven’t.  Mostly because I have over 30 birds at any given time and it’s hard to pinpoint their personalities at a glance.  Look for me to do a page or two a month, highlight each bird. Hopefully by the end of 2017, I’ll have gotten them all on there.   Right now, it’s just Dots.  🙂

3 thoughts on “The Flock Update”