Okay, so here are the week-aversaries for the middle 2 weeks of June and a lotof picspam.  🙂

The “Littles” who are not so little, are 16 weeks old now.

I’m going to have to stop calling them the Littles now because, truth to be told, the are NOT little. The Buff Orpington boys are ever bit as big as Pip and one one them is as tall as Dots. He’s a dark orange boy who thinks he’s The Boss but he’s still afraid of Dots. I laugh at him because I know he’s not the real boss. (That would still be Abby. Even Dots defers to her!)

Week 15 was a milestone for the five roosters in this bunch of brooder-mates. It is the age at which I guesstimated the boys would be old enough/big enough to head off to Freezer Camp. And also the point at which I wanted the young pullets to be integrated into the bigger flock. Originally, I’d thought to keep them all segregated until Week 15, and then integrate but, as previously mentioned, we did the integration early. It went well, and is still going well.

But no… Littles they are not. More like Mediums. Claire’s babies are the new Littles… and when Abby’s clutch happens, those will be the new Wee Ones. It’s an on-going cycle.

In the last couple of weeks, the boys in this bunch have been learning to chase the ladies, and are grabbing necks and pulling feathers, which results in lots of screaming on the part of the girls and bucking-from Dots. He does not, however, get after them and chase/reprimand them for it the way he does when Pip tries to make moves with the older hens. In short, I don’t think Dots considers them ‘his’ the way he does the older hens. He lets the 5 Brooder Boys get away with their antics, as long as they don’t go near the older ones.

This morning, I observed two of them trying to grab the same hen by the neck at the same time.   The brutes.

It’s time.  Freezer Camp registration has been scheduled for this Saturday, with five openings.

I’ve been debating sending Pip to camp instead of one of the Brooder Boys.  He’s so shy and such a loner, and I’m very afraid he won’t mingle with the girls even after the other boys are gone.  His being an only child really has hindered him in some aspects.

However, he’s also our First Farm Baby and very handsome.  I rather like his looks very much.  So, we’ll be keeping him, but I’m going to be watching him once the other Boys go.  If he doesn’t open up to the pullets before Dots snags them up by the time Abby’s new children are hatched and grown, we may still be looking at that option.  I’d hate to do it, but keeping one of the others would at least mean new genetics.  Pip is Dot’s son, so right now, any babies would all be related.  😦

And now… to lighten the mood from all this talk of Freezer Camp… here’s some pics of the Brooder Bunch from the last couple of weeks.  They have really been enjoying the Pasture a lot. 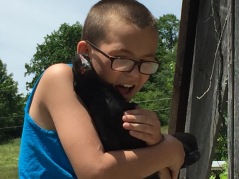 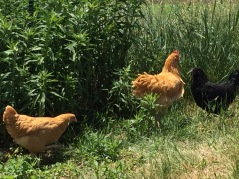 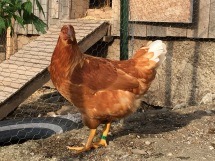 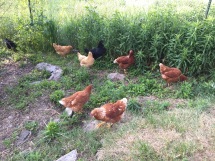 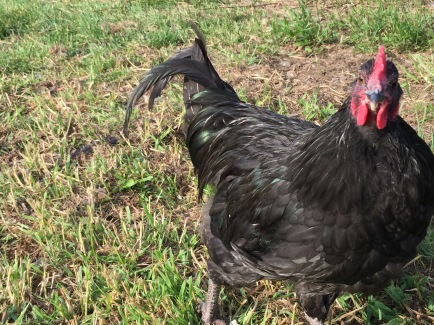 This week was Week 3 for Claire’s Littles.

It’s really hard to get pictures of them because Dani and Eugenie are always in motion and they spend so much time in the shade trees with the bigger chickens.

But here they are at Week 3.

Here are two chicks, whose mothers are both Rhode Island Reds (or the same mother, because Claire laid 2 of the 3 eggs that hatched, so 2 of the three original chicks were hers)… and one of them is redder than red … and the other is as white as a snowball.

I’m making gender guesses now, btw.  Dani, I am pretty certain, is actually Danny.  He has a way bigger comb and I can see places where the nubs of spurs are going to be.  Eugenie, on the other hand, has an almost non-existent comb.  I’m giving her fair odds on being a little girl.

Anyone else care to make early guesses are welcome to do so.  We did so well guessing the other bunch of Littles.  🙂

That’s it for this week’s birthdays! This is about the time I stopped doing Week-aversaries for Pip, so it will likely be the last day for this batch of young ones, too.

5 thoughts on “Week-Aversaries for the Middle of June”