So… I totally forgot the Week-aversaries this past week.

Here are Peanut (representing the Mystery Bin Girls, as always), an Unnamed Australorp and an Unnamed Buff Orpington.

Peanut and her Mystery Bin sisters are turning 5 Weeks tomorrow.   The Australorps and BO’s are now 4 1/2 weeks.  I chose to compare them this way to show how they match up for size.  Peanut is average-sized for the older ones.  There are a couple smaller than her.  This Australorps are all around the same size-ish, and the BO is one of the smaller ones.  There’s one that’s as big as Peanut!!!

Next I may change things up and take individual pictures of one group of them.  Maybe we can play a round of ‘hen or roo’ at the 5-week mark and see how many we get right as things progress.

I spaced off pictures of Pip this week.  He’s 19 weeks old.  It might be time to stop celebrating his week-aversaries now. However, if you’re interested… here are Dots and Pip (father & son) at the same age, roughly. 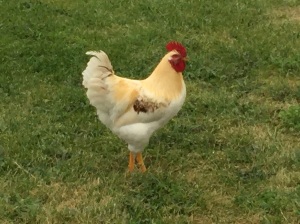 Pip, of course, is a cross between the sexlink (Dots) and a Rhode Island Red hen.  I believe they have the same mannerisms and facial features.  Even if they don’t the same coloring, Pip still reminds me a LOT of his papa.  They are both handsome lads.  🙂

Happy 6th Birthday to Double Dots!!
The ducks... Hewey, Louie and Daddle Dumplin'
If you see this beautiful Rhode Island Red today, wish her a happy 5th birthday!
The birds waiting in line to see what's going on inside the coop. (They are getting a much-needed new floor.) #chickensofinstagram🐔 #chickens #ducks #ducksofinstagram #cooplife
Double Dots welcomea Spring the only way a rooster can. 🐓🐔#chickens #chickensofinstagram🐔 #roosters #roostersofinstagram #spring
Found this under my broody girl last night. Quarter for scale. Don't know what she thinks is hatching from that! #broodyhen #fairyegg
Hello! #roostersofinstagram #roosters
This is definitely one of my favorite things to things to do in nice weather - watch the ducks on the pond. #ducksofinstagram #ducks #khakicampbell