I’ve mentioned before, I think, that when it snows, I have been luring my chickens out of the run by sprinkling the run with straw so they have something to walk on.  It’s a trick another chicken own suggested because her birds don’t like cold toes either.

Well, the result is… a LOT of straw and other crap in the run, and with Spring approaching… it’s messy.

Also, since the birds will be using the run until The Fence is built, I had yet another chicken project in mind… making them a decent make-shift dirt bathing area.

Which, since it’s supposed to be in the mid-high 60’s this week… I decided to do: 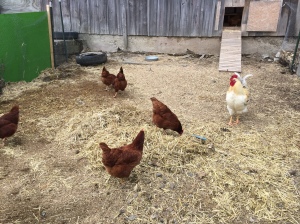 I took a rake, shovel and pitchfork and raked all the straw, rocks and general debris into a big pile for removal.  As you can see, the chickens are nosy little kids and had to check it out.  While I was getting the wheel barrow into place, they decided to ‘help’ but scratching in it and spreading it out.

More raking for Momma.  Thanks kids.

Here they are investigating the cleaned out area in one corner.  There was baby grass growing up under all that straw, and hopefully, some bugs! 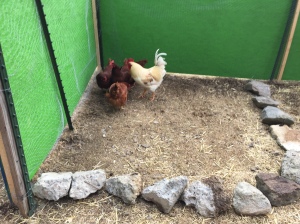 Next, I took rocks and broken cinder blocks to make a loose border around the area I want to use.

Again, the chickens investigate.  There was lots of bucking and scratching.

While they did that, I moved onto the next stage….

… filling the wheel barrow with dirt.  This dirt is from a pile of dirt/straw/crap that was left on the back barn steps last year.  It’s been sitting there decomposing and stuff for ages before that, and all summer long, the chickens slowly pecked and scratched at it and spread it all over the steps.

And since I already I know they like this particular pile of crap, I decided to use it, filled the wheel barrow, and dumped it in. 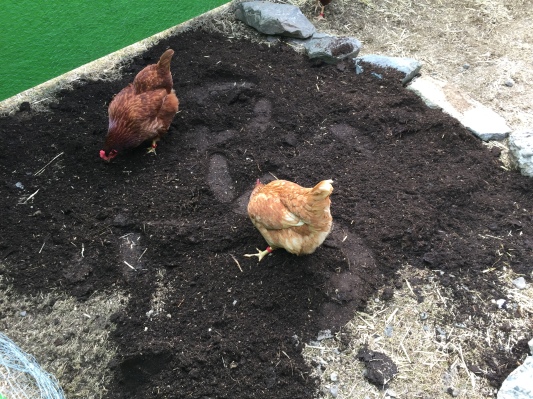 You should be prepared for this part — the investigation of the dirt.

I added another wheel barrow of old ash from our wood stove (weeks old, not recent, so not hot or anything) because I read somewhere that we could make our own dirt bathing dirt by mixing ash with dirt and diatomaceous earth.  I spread it all out and mixed it in with the rake, and then sprinkled some scratch on it to further encourage them to work it all in.

I might pick up a couple of bags of DE later on, but for now, it looks pretty good.

I’ll report back the first time I see them dirt bathing in it.

What do you think???

I think the new dirt bathing spa is a hit!

8 thoughts on “Cleaning Up to Get Dirty”