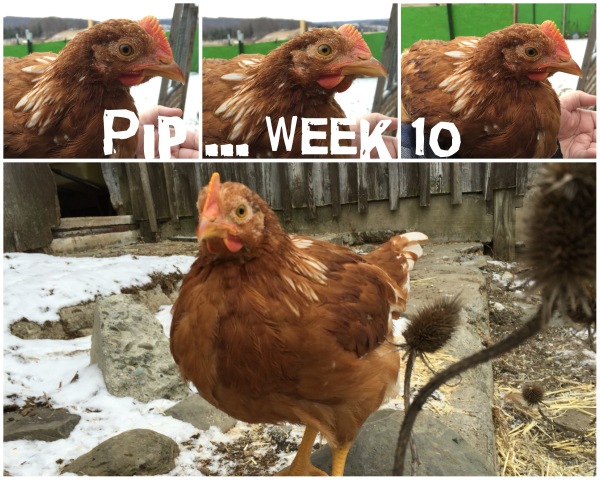 Well, Saturday Pip reached the 10 week mark.  Seriously looking more like a pretty little hen than the baby roo she/he looked like back in week 4.

The pics are from Saturday.  As you can tell, we had some snow in the a.m. but by the time afternoon rolled around it was gone.

This really has been a mild winter, which is somewhat disheartening because I was hoping the snow would be a deterrent strong enough to keep them from venturing near the road.   Since we can’t build the fence for the pasture until the spring thaw, they really needed the deterrent.

In the last 2 weeks, we’ve lost two more hens to the road.  One, Madison (aka Pip’s bio-mom, who laid the egg) was totally splattered by a man in a minivan.  He was so sorry, and came to the house to tell us and apologize.

Yesterday, Dottie (one of the ones my son liked) got clipped by a trucker, who stopped and came to the house to ask if we wanted him to help ‘finish her off’ because she was still alive, but clearly would not live.

That sounds odd, but his heart was in the right place.  His mother owns chickens and he was also very apologetic.

Since October, I’ve lost 4 hens now.  1 to a predator, and 3 to their own inability to be afraid of the road.

Especially since we haven’t had enough snow to speak up in my part of the world.

Although, we did get some today, and supposedly its going to keep falling on and off all day.

Pip was not impressed.  He/she went outside the coop and run to explore and came running back freaking out.  I even got this video of him/her trying to find a safe place to roost, so his toes wouldn’t be cold.  Poor baby!

The last thing… has anyone tried growing sprouts for their chickens in the winter?

Winter is almost over for us now, but I’m wondering if little beds of sprouts wouldn’t be a good encouragement to stay on the safe side of the road?  It’s the ‘greener grass’ on our side (not that there is actually green grass right now, but you know what I mean) that is attracting them.  Something new and different.

3 thoughts on “Pip in Winter, Sprouts and Other Things”

Happy 6th Birthday to Double Dots!!
The ducks... Hewey, Louie and Daddle Dumplin'
If you see this beautiful Rhode Island Red today, wish her a happy 5th birthday!
The birds waiting in line to see what's going on inside the coop. (They are getting a much-needed new floor.) #chickensofinstagram🐔 #chickens #ducks #ducksofinstagram #cooplife
Double Dots welcomea Spring the only way a rooster can. 🐓🐔#chickens #chickensofinstagram🐔 #roosters #roostersofinstagram #spring
Found this under my broody girl last night. Quarter for scale. Don't know what she thinks is hatching from that! #broodyhen #fairyegg
Hello! #roostersofinstagram #roosters
This is definitely one of my favorite things to things to do in nice weather - watch the ducks on the pond. #ducksofinstagram #ducks #khakicampbell