Well, it’s been a busy couple of weeks here at our house, and while I had pictures to share, I just haven’t had time to share anything.

We’ve had snow, which meant my not-so-winter-hardy winter hardy birds spent most of the last week and a half in the coop.  They went outside just long enough to get a breath of fresh air, look at the snow on the ground and rush back into the coop with a very definitive ‘oh heck no! Our toesies are COLD!’   Because forbid their toes are cold.

Yesterday, after spending most the week indoors, it warmed up enough for them to come outside. They explored, hunted for food, and got in some dirt bathing.

By the end of the day, most of the snow was gone. It still is, so there’s mud and some green stuff to peck at. They’re happy campers… or would be if there was more bugs.

Last Saturday was Pip’s 6 week-aversary. I took pictures, and yeah, forgot to post them. 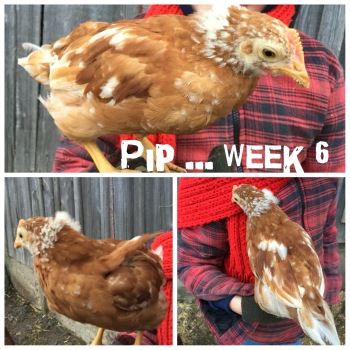 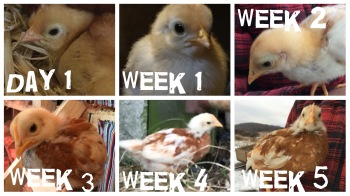 So much for having a buffy-colored chicken, huh? He’s turning into the same golden red as the sexlinks. It’s kind of cute because he looks more like his gold sexlink momma rather than a Rhode Island Red. If I hadn’t been present when Madison laid Pip’s egg, and wrote her name on it right away, I would never have guessed.  The egg layer is a dark red and there is almost no dark red on Pip at all.

Pip is growing, getting bigger. He’s now a little over a 3rd the size of Abby, his momma.  He’s losing a little more of the residual baby fuzz on his neck.  That’s really the only spot he still has some.  And… I’m not sure if you can tell from the Week 7 photo, but his comb is getting pinker.  Same with his wee little wattles.  I’m holding strong that I think he is truly a ‘he’ and not overly big she.  Time will tell, though.

Following in the same vein as my last post, Abby and Pip are still breaking down my ‘understanding’ of how ‘things are supposed to work.’   EVERYTHING I’ve read in various forums and places have all said that by the 6th week, a mother hen will leave her chicks to start hanging out with her flock again, and start ignoring them in an attempt to ween them and transition back into being a laying hen again.

At week 7, I see NONE of that type of behavior at all between Abby and Pip.  Pip is still Abby’s constant shadow in the barn yard and coop.  If I pick Pip up and walk away, Abby follows me.  If I pick Abby up and walk away, Pip follows.  They sleep together still, although it’s getting harder for Pip to sleep under her wings.  I’ll have to get a picture tonight and show you.  It’s amusing.

I did notice today that Pip was straying away from her a little, but never more than a foot away from his momma at best.

I’m wondering if this due to Pip being an only child, or Abby’s first hatch, or because it’s winter and keeping him close means Abby has a buddy to cuddle with when it’s cold?  I don’t know, honestly, but the only thing I do know is that she is definitely not shoving him away in the manner most the chicken forums said she would.

Now, seeing as today is a beautiful sunny day, I’d like to end with some pics of the chickens enjoying it.

One thought on “Snow, Sun, and a Couple More Weeks With Pip”