Sunday, I was asking about toys or items to keep my little flock happy, entertained and not beating each other up.

They are gold sex links, and we have twenty of them.  If I’m reading things correctly (various chicken websites), we have 3 little girls and 17 boys.   The boys are starting to think they are chickens and ‘play fighting.’  By that, I mean challenging each other and puffing out their little, still-downy chests.  It’s amusing to watch, but I worry about them turning into little bullies without better things to do.

Yesterday at breakfast, I found on of the bigger guys sitting on top of their feeder.

They needed a perch.

So I looked around the barn and found a cut piece of wood left over from where DH finished with the coop and put it in the brooder, leaned slanting in one corner.  They freaked out.  Totally ran to hide behind their feeder.  Chickens, I swear!  Little Dude and had a good laugh over the freak out.

This morning’s breakfast, I found this: 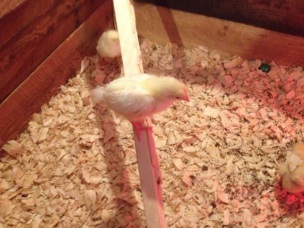 I’m king of the world! 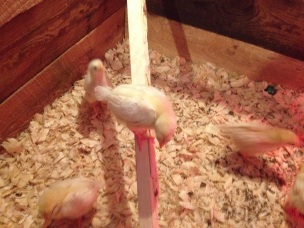 Hey, how’d you get up there?

While I cleaned up their water dish and filled their feeder, I observed three others checking it out.  Some of them walked up to it and pecked it repeatedly, even two of my little girls, which pleased me because they have been shy compared to the boys.  So I stayed a little longer than usual, picked up a couple to talk to and cuddle, and fed a few of them by hand… and watched more of them experiment with their new perch.  Not freaking out any more.

The ‘hand feeding’ thing had a twist or two today, too.  Instead of one or two brave little guys tentatively pecking from my hand, I had so many trying to eat the chick starter that I had to refill the palm of my hand (I do have small hands, by the way) three or four times.  They swarmed me, pushed slow pokes out of the way, and one of them jumped up on the perch to try and get what I had to offer.   Even two of the girls got in on the act. Again, my girls are shy, so I am very pleased.

The best part was that one of the chicks I picked up with cuddle didn’t want me to put him down.  Instead of scrambling to get away when I put him back in, he sat on my hand, happy as a clam, and when he didn’t move and didn’t move, I used my other hand to get some feed and held it out to him.  He sat there, eating chick starter out of my hand, until was gone.  I literally had to put him down, because didn’t want to step off.  If someone (Mom, Little Dude) had been with me, I might have gotten a picture of it, but alas! I am usually solo in the mornings.

Well, not entirely solo.  The last couple of days, I’ve noticed a barn cat when I come down in the morning.  He runs off when I open the door, but I suspect he knows my little ones are there.  One of these days, I’m going to catch him on top of the brooder.  It’s a good thing we have it secure.  There’s chicken wire, window glass and sturdy boards.  Cat can’t get through that so easily.

One thought on “Perches and Predators”